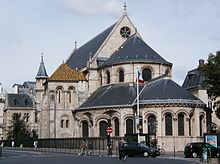 WILCO researcher Laurent Fraisse presented some of the outputs of the WILCO research on social innovation in the local governance of welfare services during a special meeting in Paris attended by academic and grassroots participants. Organized at the Conservatoire National des Arts et Métiers (Cnam) in partnership with the Sciences, Innovation and Technical in Society Research Programme (IFRIS), a national network of excellence on innovation, the Interdisciplinary Laboratory of Economic Sociology (LISE) and the popular university of the Cnam, around forty participants joined the debate.

As first speaker, Jean-Louis Laville, Professor of Sociology at Cnam, looked at the conceptual contribution of research sciences and technologies in the analysis of innovation processes with a social innovation perspective. He underlined the progressive integration of the organizational, cognitive and social networking dimensions within the conceptualization of technological innovations. Despite inspiring analogies, social innovation initiatives have their own autonomous dynamics, such as explicit societal goals, the emergence of new innovators beyond the business milieu, diffusion mechanisms not reduced to market selection, general and specific aspects related to social changes, human needs and even social movements. He concluded by distinguishing solidarity-based initiatives that contribute to making modern society more democratic and participative and social entrepreneurship innovations as a component of the transformation of post-crisis capitalism.

On the basis of case studies in Nantes and Lille, Laurent Fraisse discussed to what extent local public policies are able to integrate the social innovation referential. He stressed the fact that social innovation discourse and action are no longer the monopoly of civil society networks and grassroots practices. Some local authorities have partly integrated social innovation in certain local public action frameworks. Several initiatives presented in WILCO reports were launched by the Lille and Nantes municipalities. This new context creates an ambivalence in the ability of social innovation to transform local social policies. On the one hand, a number of new policies, such as social and solidarity-based policies, and certain local housing and childcare programmes in Nantes and Lille create an enabling environment for experimental strategies and innovative practices. But these institutional niches may coexist with strong processes for rationalizing welfare policies dominated by quantitative and cost efficiency objectives. Between the local political will to support grassroots initiatives and social innovation as a way to restructure local social policies, the meaning of social innovations in a context of economic austerity and social spending cutbacks may be interpreted very differently at the local level.

Pierre-Benoit Joly, Director of IFRIS introduced the discussion, emphasizing that the discourse on and interest in social innovation at the European level is a new opportunity for changing the dominant representations on innovation despite the residual aspect of many initiatives. Debate with grassroots practitioners focused on the diffusion of social innovation beyond a specific niche of activities, organizations or processes. Recognizing emblematic practices is necessary but not sufficient for ensuring dissemination in other local contexts. Testimonies from social entrepreneurs confirmed the importance of local and sectorial contingencies and institutional resistance. Which codified processes of diffusion are relevant while avoiding undermining the major innovative aspects? This led to an examination of the process of institutionalization of social innovation. Some participants wondered to what extent recognition in law as discussed by the national parliament in the context of the Social and Solidarity Act would facilitate various innovative social dynamics or, on the contrary, limit the kinds of practices that underpin this notion.

The evaluation of the outputs and impacts of social innovations were also at the heart of the discussion. Researchers could not be satisfied with an assessment of the process of social innovation disconnected from the outputs. Bringing a credible answer to this method is a common challenge shared with all kinds of innovation processes characterized by a certain degree of risk and uncertainty on outputs, which is not always well appreciated by public investors.