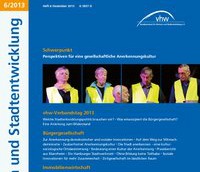 From Amsterdam to Zagreb the situation is similar: there is a lack of jobs particularly for young people; in many locations rents are rising drastically. There is as much lack in adequate housing as in supprt for families and flexible child care arrangements. Research shows that Europe’s municipalities are under strain.

Deficits identified directly impact on the life of citizens in Europe. In order to strengthen social cohesion on the local level, research and politics focus on social innovations. Most important aspect of innovation is the participation of citizens. Participation supposedly helps them finding creative solutions for social problems.

This article by Andrea Walter outlines the concept of social innovation and introduces the WILCO project and its objectives to a wider audience in the German publication “Forum Wohnen und Stadtentwicklung”, published by the German Federation for Housing and Urban Development in December 2013.

Read the article in German.