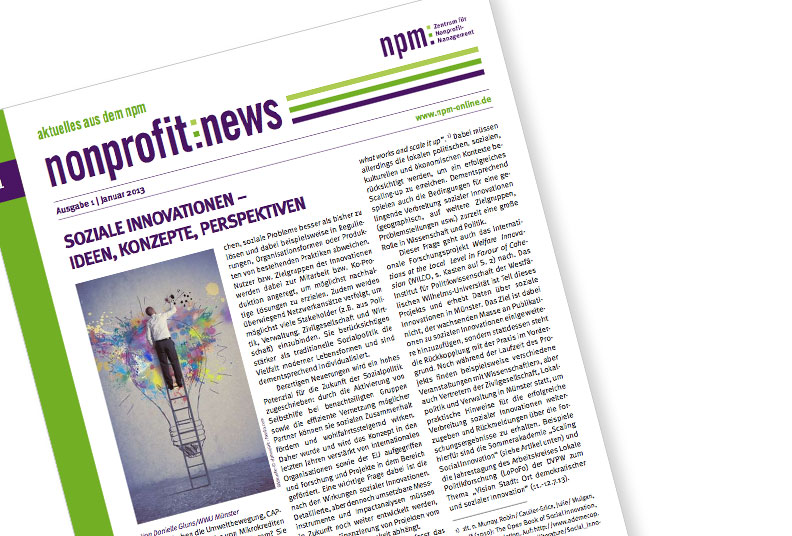 In the article “Soziale innovationen – Ideen, Konzepte, perspektiven” (“Social Innovations – Ideas, Concepts, Perspectives”), WILCO researcher Danielle Gluns from Münster University analizes some of the ideas and examples around the concept of social innovation.

What do the ecological movement, CAP-supermarkets and micro-credits for women in Bangladesh have in common? They are all examples for the phenomenon of “social innovations”, which is currently broadly discussed in political debates, in social sciences and civil society. Even though there is no unitary definition, “social innovation” is generally describing new ways of solving social problems. New approaches such as networking of different stakeholders or co-production in social policy are widely expected to be promising solutions to pressing social problems. Therefore, different political actors are trying to promote social innovations.

But what are the conditions of success or failure for the scaling-up of social innovations? This question is tackled by the research project Welfare Innovations at the Local Level in Favour of Cohesion (WILCO), which is financed by the European Commission as part of the 7th research framework. Part of the project concentrates on the link between research and practice, which is why there are several activities linking researchers and stakeholders from politics, public administration and civil society. Two of these activities at the University of Münster are a summer school on “Scaling Social Innovation” and a conference of the Arbeitskreis Lokale Politikforschung (LoPoFo) of the Deutsche Vereinigung für Politische Wissenschaft (DVPW) on the topic of “City Visions: Places of Democratic and Social Innovation”.