The ORIF (non-profit private organisation for integration into employment and professional training) addresses the reintegration into employment of people suffering from health problems. Marginalised young adults are part of the target group: due to medical conditions, some of them cannot get back to the labour market with the job they previously had, while others experience difficulties at the early stage of their entrance into the labour market. Training in companies and various shadowing modules are organised to enable individuals to be aware of what they can do, with respect to the types of jobs and tasks. Finally, ORIF tackles the diverse dimensions of social vulnerability – not only health but also lack of qualifications, marginalisation, absence of professional projects and distance from the labour market.

The ORIF marks a contrast with other programmes that focus on the (re)integration of young people into employment with less attention to the multiple dimensions of social trajectories and vulnerability. On the one hand, ORIF offers professional training that takes into account people’s health problems; services in charge of integration into employment develop a significant network of companies likely to hire young adults once a period of training is completed. On the other hand, ORIF helps to develop autonomy and self-responsibility. In the ORIF facilities, people are involved into the community through activities and exchanges with other people. ORIF wishes to develop employability of people but differing from other structures, we have been observing an interactive employability frame (Bonvin and Farvaque 2007) in which developing self-responsibility goes with real social opportunities for recipients.

68.2. Conception and ways of addressing users

Many young adults welcome at the ORIF have learning difficulties related to intellectual, motor and behavioural disabilities. Traditional learning processes were challenging for them and the ORIF is in charge of implementing programmes enabling them to integrate into jobs while taking into account their individual difficulties. The Office for Disability Insurance funds and follows these young people.

The first innovative dimension of the ORIF programmes is the global approach of individuals: assessment takes into account health status and its evolution as well as diverse problems of socialisation. The head of ORIF says: “these young people have failed and they are not self-confident. Our role is enabling them to be self-confident so that they develop their abilities and enter the labour market”. To perform the global approach, a multidisciplinary team, comprising a psychologist, experts in special education and teachers, supports people. “Each individual is supported by two people: the first one is an expert in training while the second one is a social adviser in charge of working on social skills in relation to the young person’s family environment.” Conception of users considers social trajectory (learning difficulties, school paths) but also the type of social milieu in which people move.

A second significant dimension is the long-term support, from the beginning to the end: in other words, measures start with assessment, continue with training and conclude when people are back to work. This support marks a significant contrast with other programmes, which are only in charge of one dimension (skills assessment or training or job search strategies). The ORIF support lasts 3 years. The first one focuses on the career choice. The NGO offers training in 10 professional sectors and young people are involved in diverse job experiences to be able to choose further a type of job. At the end, young people have to argue their choice in front of the ORIF managers. The first year also focuses on a school upgrade and on a specific course on social skills. The second and third years are about training in various places: in the ORIF facilities, in private companies and in classic vocational schools.

68.3. Internal organisation and modes of working

The ORIF is a Swiss NGO with nine offices/training centres among which one is located in the canton of Geneva. The ORIF as a whole has 400 workers. Each ORIF centres has its own director and team. The Geneva ORIF may welcome 90 trainees in diverse job sectors: cooking, masonry, landscaping, parquet flooring, mechanics, and sales among others.

The ORIF only welcomes young adults who are sent there by the Office For Disability Insurance. The project is based on the idea that disabled people have remaining/residual working abilities that enable them to integrate into the labour market. Modes of working consist in supporting people in the diverse steps of professional integration:

On the one hand, ORIF contributes to a process in which each individual has to participate in the labour market: we have been witnessing a workfare regime with an “activation” of social expenditures. Disability benefits should not prevent people from being integrated into the labour market. In this perspective, the welfare goes with a contract involving obligations and responsibilities on both hands. The contract refers to the liberal perspective meaning that social assistance should not be mechanical and universal but rather tied to formal arrangements between participants involved. But on the other hand, we have been witnessing an empowerment of people because they are not reduced to their disabilities, are encouraged to develop their abilities and to become full members of society (see for instance Jacques Donzelot in Un Etat qui rend capable, 2007).

Figure 1 – Organisation of the 3 years training 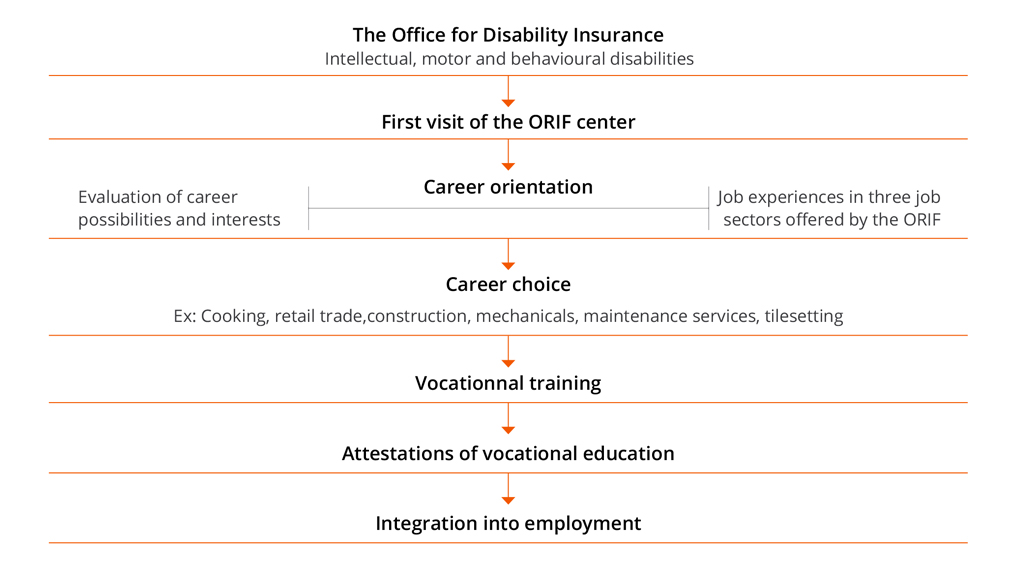 68.4. Interaction with the local welfare system

The impact of the ORIF is less about governance than about the conception of how young people enter adulthood. Within the local welfare system, we find divergent views of instruments and policies targeting young people. Debates about the Emplois de Solidarité are a significant example. This programme offers long-term jobs to people who cannot integrate into the primary labour market. Within the working group implementing this programme, there were debates about whether young adults may have benefited from the emplois de solidarité. To the manager of the project as to the head of the Department of Employment and Solidarity, young adults were not considered as relevant recipients. The manager says:

The emplois de solidarité should not be the beginning of a career. Starting with this type of job would not be great. Most of recipients are more than 55 years old. People under 30 years old must follow training and get a qualification. The emplois de solidarité are not for this category of people but for those who are likely to dissocialise. Young people are not as a risky population as older people from this point of view.

In this perspective, youth and early adulthood are defined in a normative way: they are associated with training and the latter is supposed to lead people to employment. Youth appears as a life cycle organised around traditional markers – going to school, choosing a career path and getting a job, all occurring in a linear way.

Still, research highlighted that this representation of youth is much less relevant than it was before. Scholars have underscored a highly fragmented life transition focusing on how employment and an extended school course have meant that many traditional markers of adulthood have occurred later, sometimes not until the early thirties or beyond. Some researchers even assert that defining youth as a process of transition is not relevant any longer. According to these scholars, youth is fundamentally a process of individualisation, a long life stage both uncertain and unfinished (Van de Velde 2008). It goes hand in hand with risk biographies. To some extent, we may think that changes into the entrance into adulthood and its fragmented features have been overlooked in some debates within the local welfare.

The ORIF project is innovative because it takes into account the diversity of youth and how intellectual, motor but also behavioural disabilities impede integration into training and participation to the labour market. Going to school, access to training and getting a job do not occur in a linear way and sometimes, they need to be supported through public programmes. In a general manner, Nicolas Frossard, the head of the NGO Realise1, disapproved strict rules in a matter of selection of target groups. He says that, “too precise rules immediately imply logics of exclusion. With another head of an NGO, we have defended flexible measures enabling stakeholders to have more freedom in how they combine means and goals”. The ORIF project concurs to this more flexible approach of populations.